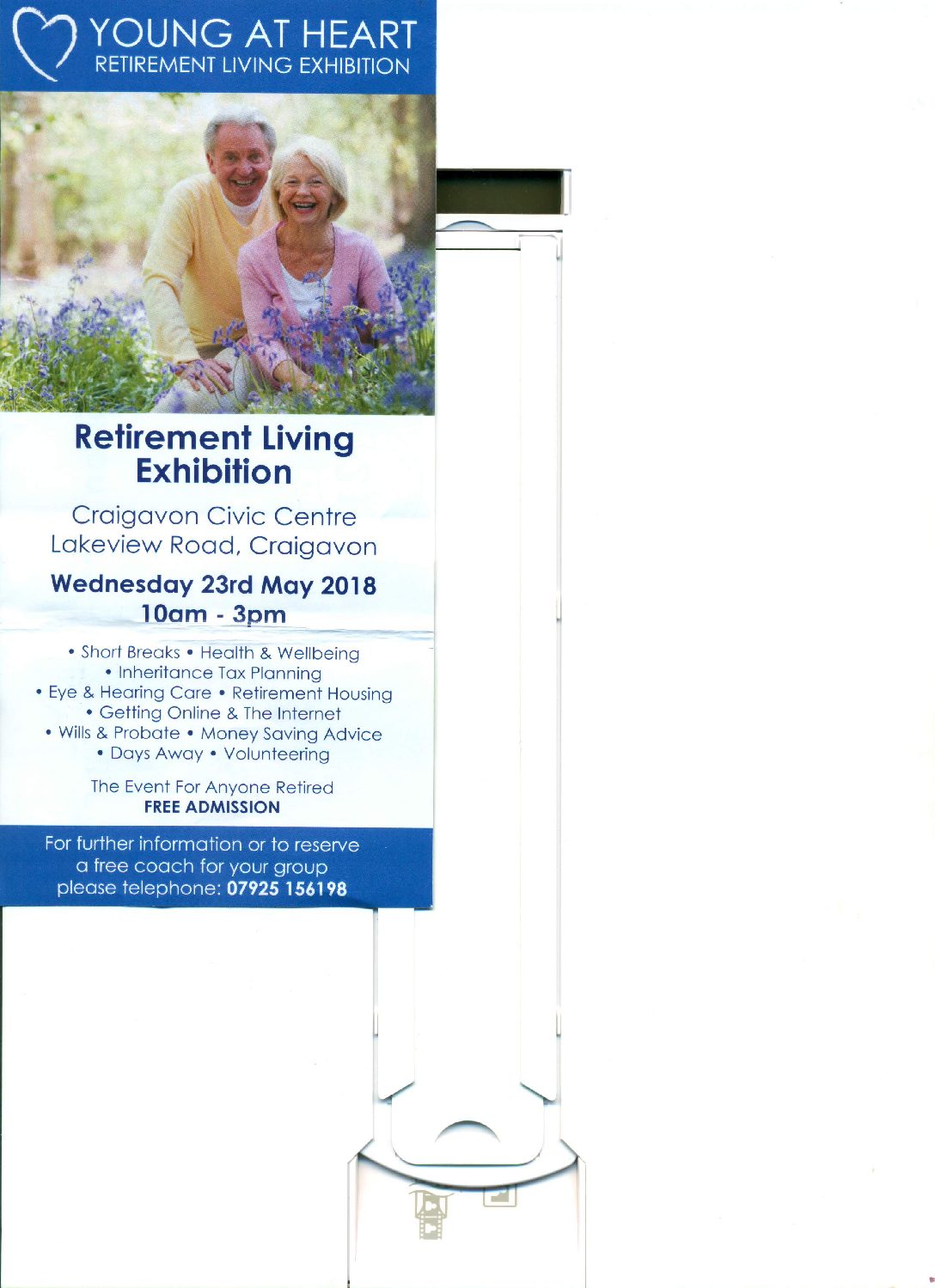 Come along to Craigavon Civic Centre on Wednesday 23rd May between 10am and 3pm for free information/advice for retirement living.  You can bring along your antiques for free valuation. 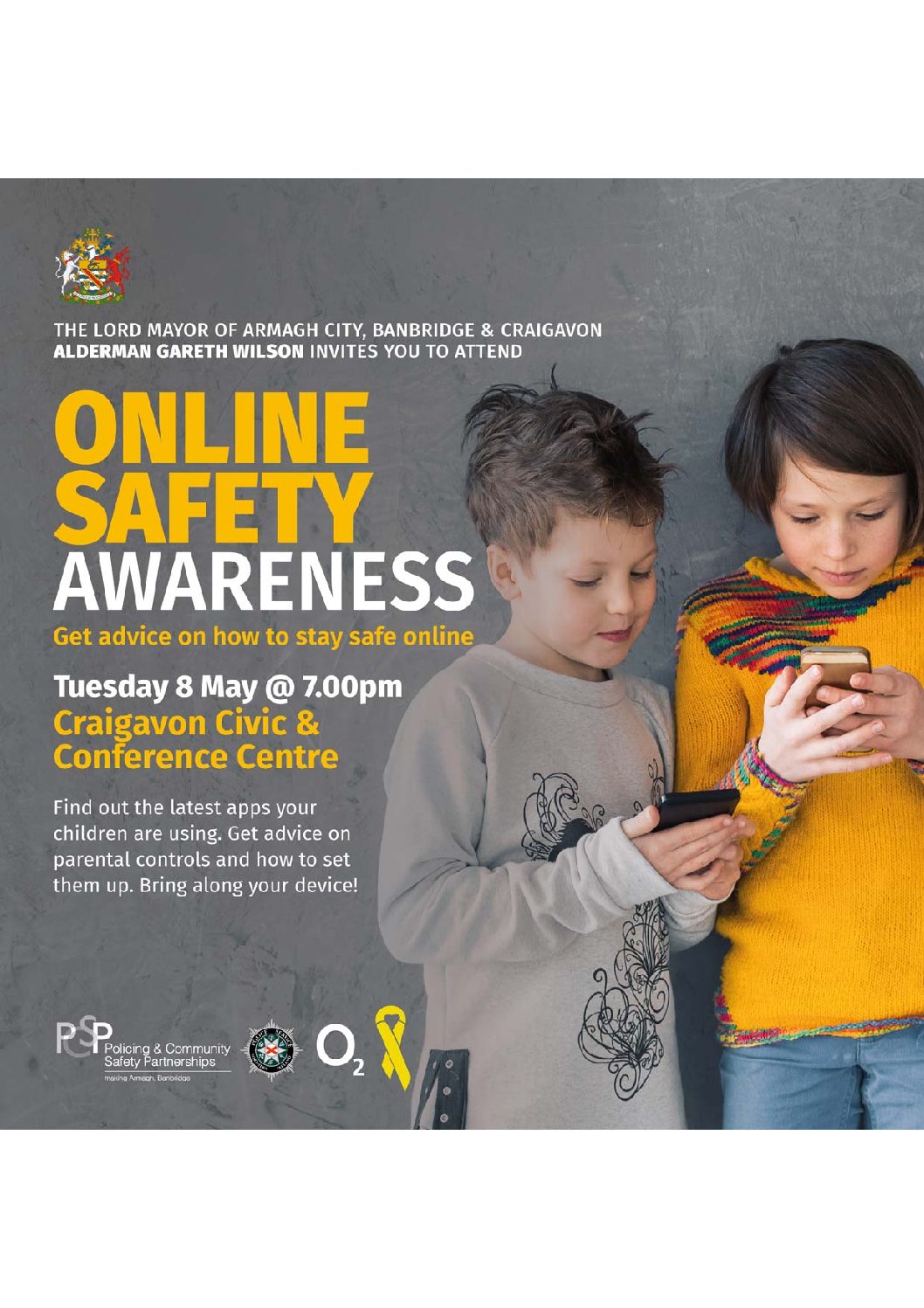 Come along to the Online Safety Awareness hosted by the Lord Mayor of Armagh City, Banbridge & Craigavon Alderman Gareth Wilson. 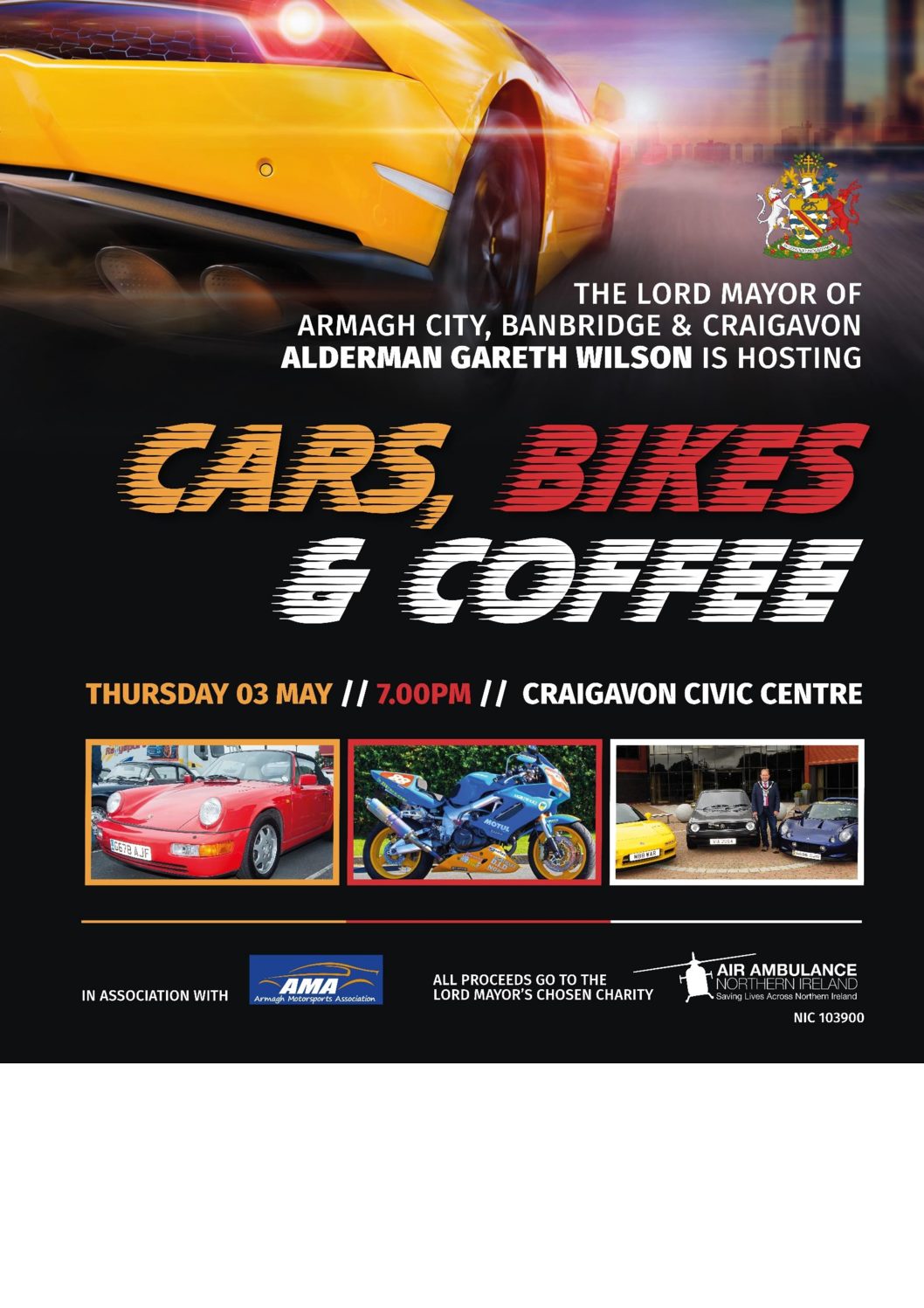 Following the fantastic success of the ‘Cars and Coffee’ event held last year by the Lord Mayor, Alderman Gareth Wilson, a bigger and even better second event is being held next week – with all proceeds once again going to the Air Ambulance Northern Ireland charity!

Organised in conjunction with Armagh Motorsports Association ‘Cars, Bikes and Coffee’ is taking place on Thursday 3rd May at 7pm and will see Craigavon Civic and Conference Centre taken over by a huge variety of very special cars and bikes – some of which will be a real once in a lifetime experience to see!

Think classics including the Lord Mayor’s classic golf, super cars such as Lamborghinis, Lotus’s and Ferraris as well as some exciting motorcycles – you can begin to imagine what the night has in store!

The Air Ambulance is a much-needed resource for Northern Ireland and the Lord Mayor is looking forward to raising some more funds for the charity.

You can also enjoy some music on the night as well as refreshments including teas and coffees, hot dogs and ice cream to keep you fed and watered as you take in the sights!

There will also be spot prizes throughout the evening including the chance to win a £100 voucher for Modern Tyres!

There is no entry fee but people are asked to make a donation of their choice – and have a fantastic night! 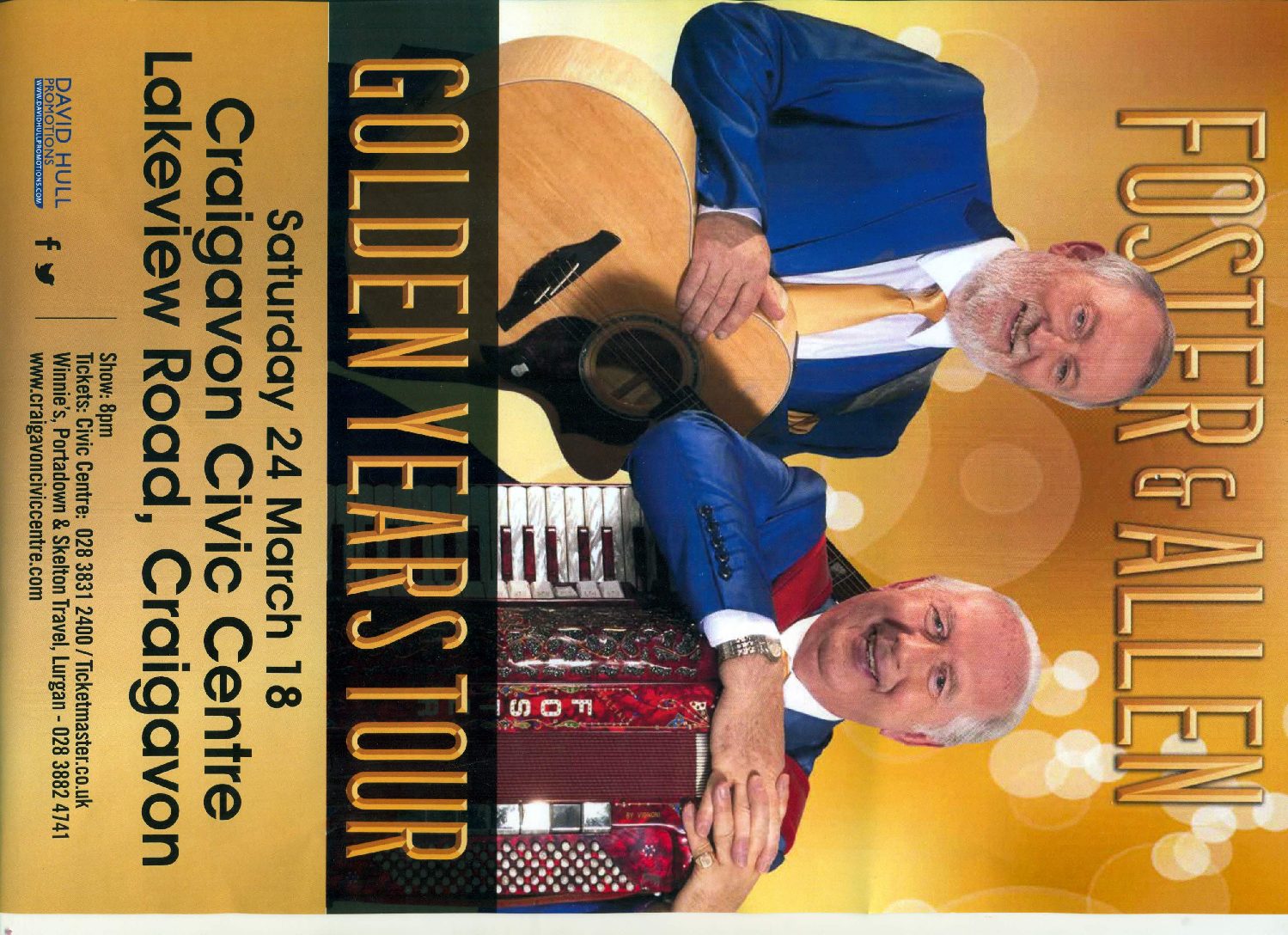 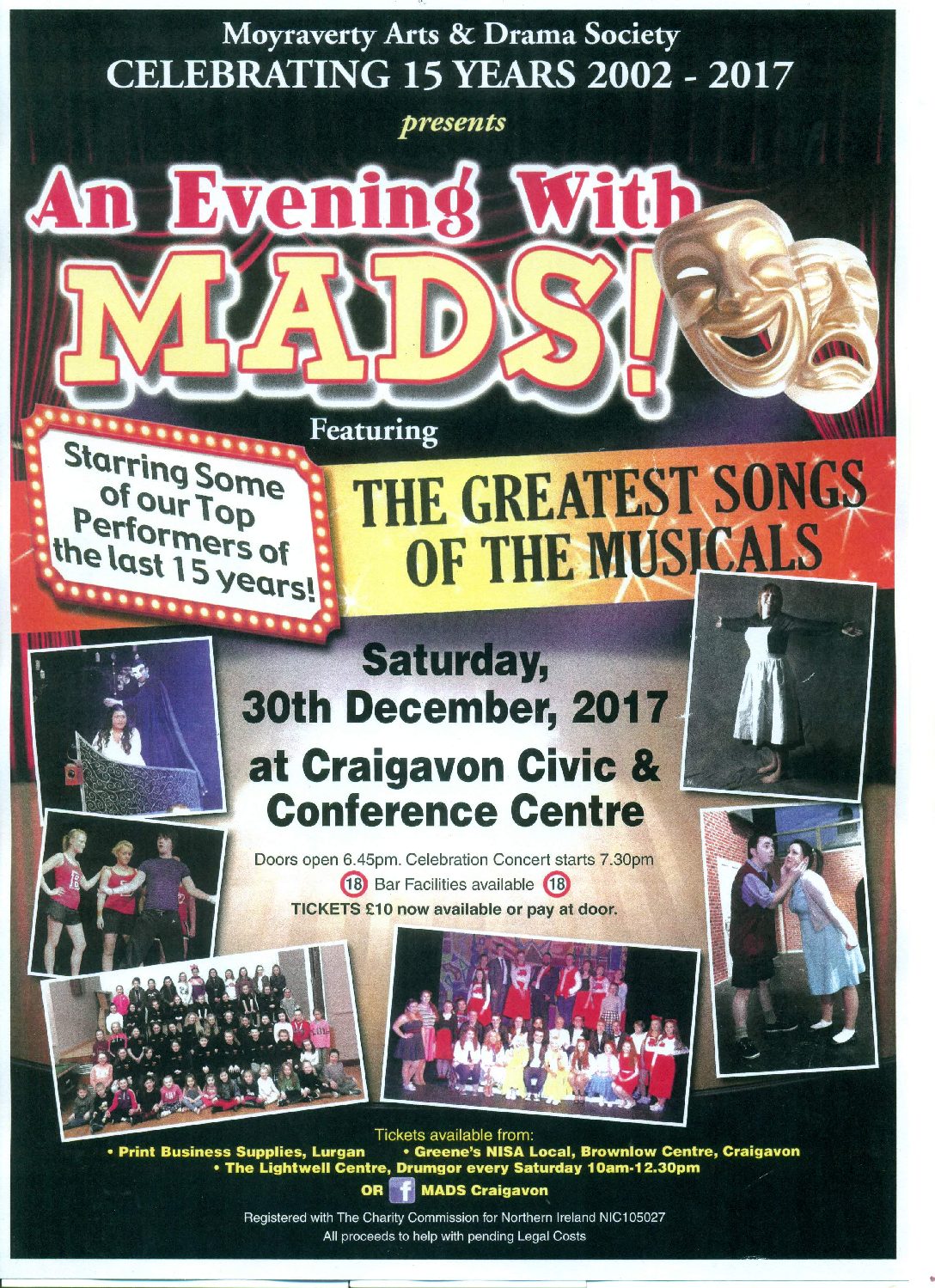 Come and enjoy the greatest songs of the musicals with Moyraverty Arts & Drama Society as they celebrate 15 years (2002-2017) starring some of the top performers of the last 15 years.

Tickets £10 – now available or pay at door.  Tickets available from: 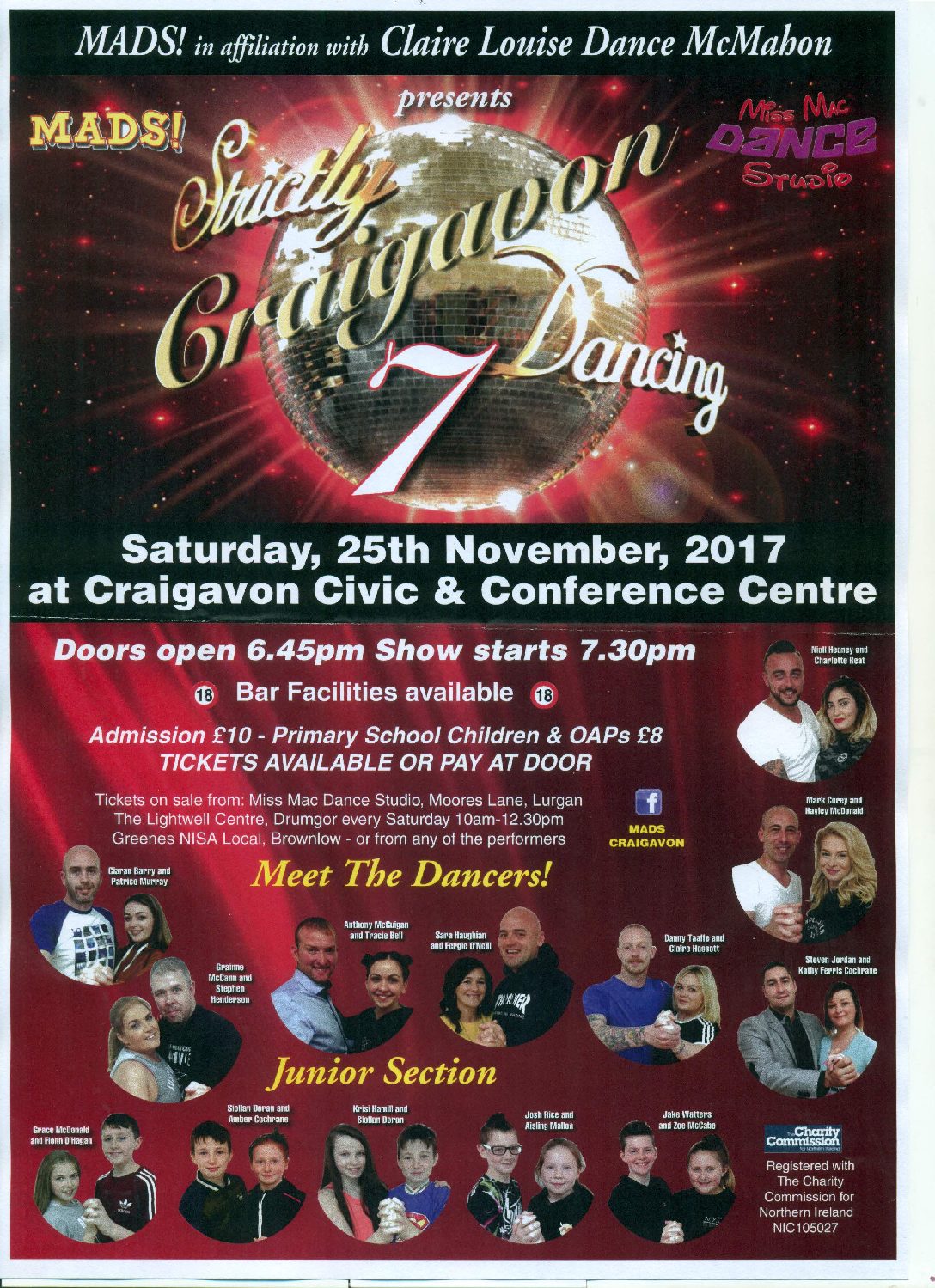 Admission £10 or £8 for primary school children and OAPs.

Tickets on sale from:

Or from any of the performers. 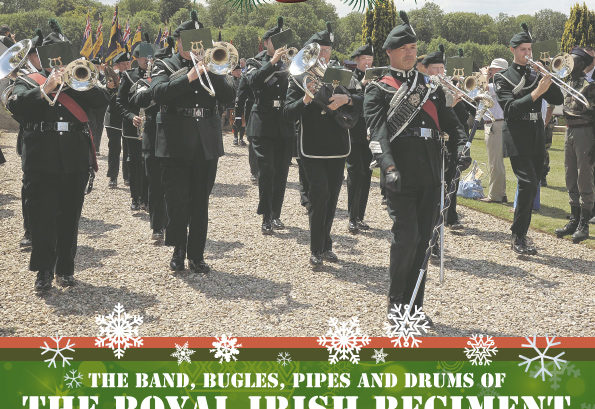 The Band, Bugles, Pipes and Drums of The Royal Irish Regiment will perform in concert on Saturday 9th December at Craigavon Civic & Conference Centre.  Concert starts at 8pm and doors open from 7pm.  Tickets are £10 each and can be obtained from the Mayor’s Office in Armagh Palace Building (02837529633) or Reception in Craigavon Civic Centre (02838312400). 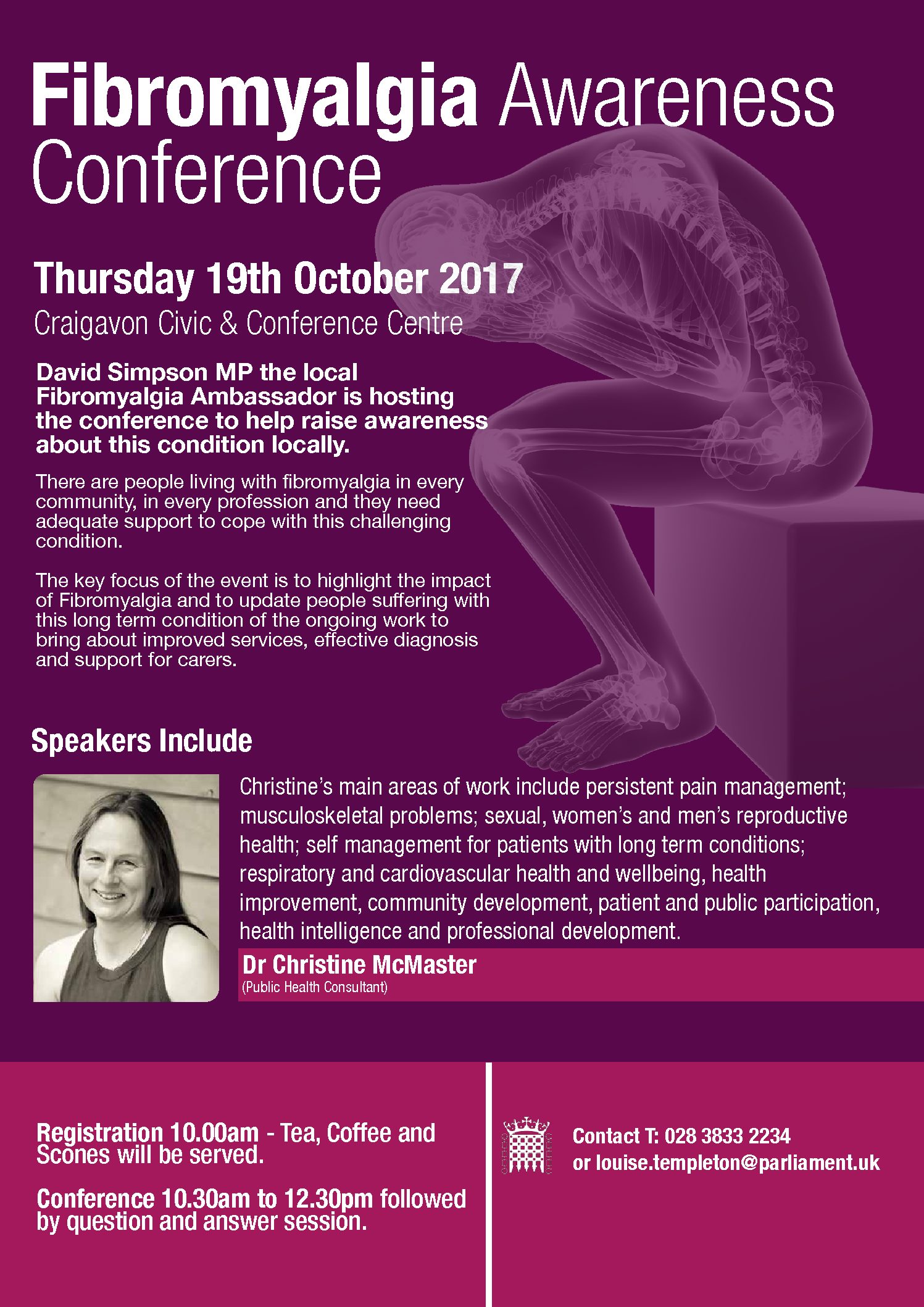 David Simpson MP the local Fibromyalgia Ambassador is hosting the conference to help raise awareness about this condition locally.

There are people living with fibromyalgia in every community, in every profession and they need adequate support to cope with this challenging condition.

The key focus of the event is to highlight the impact of fibromyalgia and to update people suffering with this long term condition of the ongoing work to bring about improved services, effective diagnosis and support for carers.

Registration @ 10am.  Tea/coffee/scones will be served.

Conference 10.30am to 12.30pm followed by a question and answer session.

A fantastic evening of entertainment will take place at Craigavon Civic Centre on Saturday 12th August.  The night will consist of a variety of musical performances in many styles including pop, classical, musical theatre, country and more!  There will also be a free buffet.  A bar service will be available and a raffle.

Funds raised will contribute to Eimear’s once in a lifetime opportunity taking up a place at the most highly regarded and reputable Musical Theatre Training College in Europe if not the world.

Tickets are £20 and can be obtained from Eimear – ecrealey95@gmail.com – or you can pay at the door.  In return you will be guaranteed a great nights craic, a few drinks, beautiful food and a wealth of musical talent!